I wish I had seen this before. I wish I had been paying attention. Sage Sharp, noted code of conduct advocate, tweeted this today:

Sage was referencing this sentence in the O'Reilly conference code of conduct:

We invite you to help us make each O'Reilly conference a place that is welcoming and respectful to all participants, regardless of race, gender, gender identity and expression, age, sexual orientation, disability, physical appearance, national origin, ethnicity, political affiliation, or religion.

We invite you to help us make each O'Reilly conference a place that is welcoming and respectful to all participants, regardless of race, gender, gender identity and expression, age, sexual orientation, disability, physical appearance, national origin, ethnicity, or religion.

By April 15, 2017, "political affiliation" was added as a protected class.

I'm not going to get into the specific policies carried out by the prevailing administration in the United States, including their targeting of transgender people, queer people, people of color, and health and reproductive rights. You can google that.

But the inclusion of this language, making political affiliation a protected class, leads me to believe that alt-right technologists would be as welcome at the conference as I would be. Including alt-right technologists who display on their clothing, for example, neo-Nazi insignia. Or t-shirts printed with anti-trans or anti-Black slogans. These could easily be interpreted as protected political speech.

To be clear, the code of conduct as it was written in 2016 already prohibited harassment of all kinds, including harassment of a political nature. But the 2017 language makes political affiliation a protected class, which means by my reading (and the Wikipedia definition) that people of specific political affiliations qualify for special protection by the authorities in charge of the event. This is a subtle but important distinction. This is an elevation of political affiliation-- an actively chosen belief system-- to the same level as race or gender or sexual orientation, which are not chosen traits.

You can't make marginalized people-- who are enumerated as a protected class-- feel safe, and simultaneously make members of political groups who stand violently opposed to us feel welcome. And it doesn't matter if these people act nicely in public. The very act of placing these two groups on equal footing puts marginalized people directly in harm's way. And how would conflicts between these protected groups be handled?

You might think that politics don't belong at a technology conference, but I would argue that politics and software are so tangled that they cannot be reasonably separated. Consider the GPS software that tells you how to get to a restaurant, that is also used to power military drones. Or the facial recognition software that unlocks your phone, being used to record, track, and target the activities of political dissenters. Or even simple things, like he/she pronoun selections on sign-up forms. Or health and wellness apps that assume that all women menstruate, or that none of their users menstruate. All of these technologies are inherently political. There is no neutral political position in technology. You can't build systems that can be weaponized against marginalized people and take no responsibility for them.

You may still think that I'm speaking in the abstract. OK, let me show you an actual slide from the presentation that I was going to give next week at OSCON. This is in my introductory section, where I provide a little background on who I am. 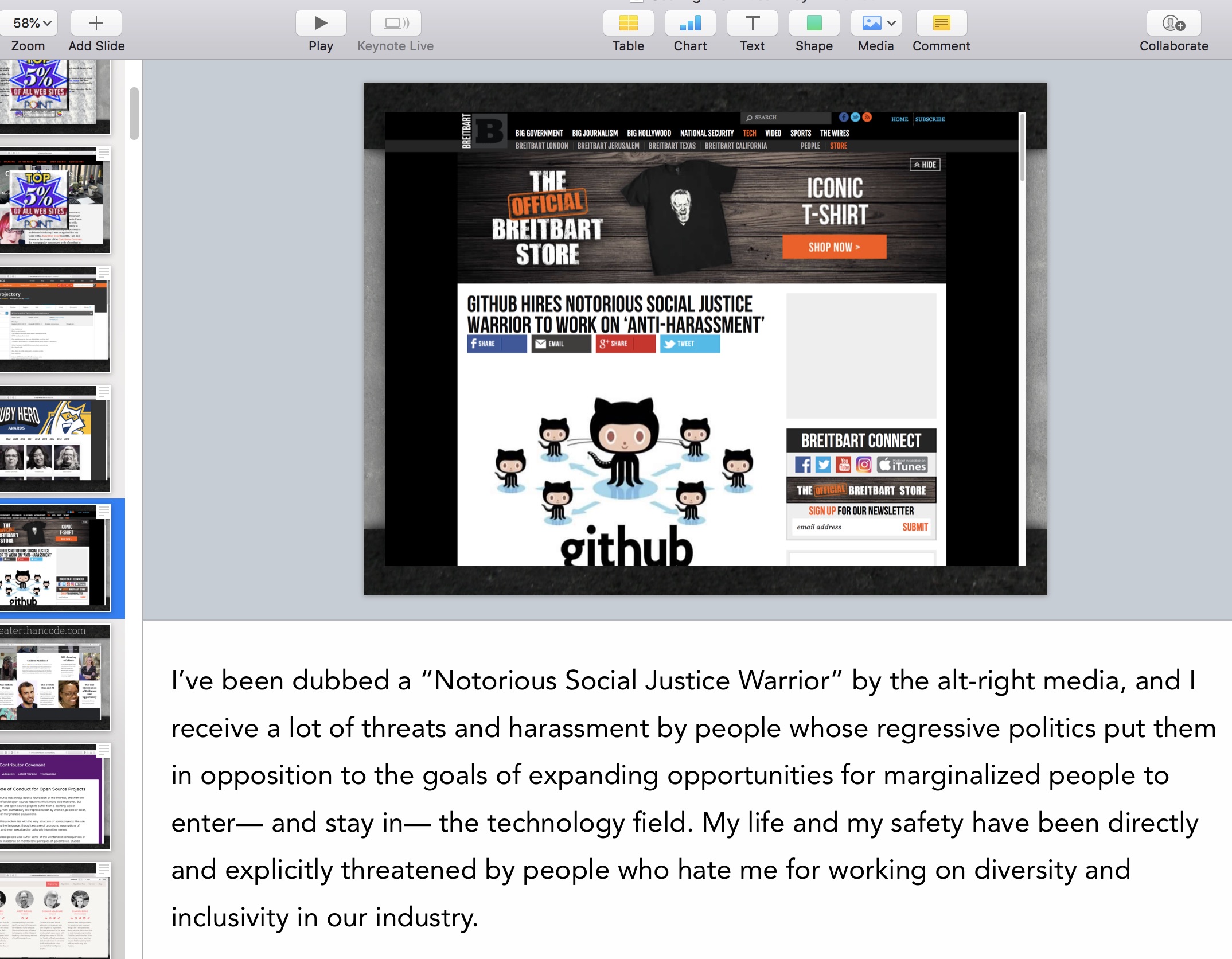 By my reading, this slide would be a code of conduct violation. I specifically asked Tim O'Reilly about this, and he responded simply "No." But I have no faith in that answer. The wording of the code of conduct is contradictory, which leaves me feeling anything but safe. And my safety and security are more important than a conference talk.

I cannot in good conscience support OSCON in any way, and I have withdrawn from speaking there next week.

Tim O'Reilly published a blog post on LinkedIn saying that the language would be removed and apologizing for its inclusion. However, in his apology, he did not back down from the basic idea that political affiliation should not be allowed to be a source of conflict between attendees at O'Reilly events. It will be interesting to see how this plays out when marginalized voices are raised in speaking about systemic injustice in the tech industry.

Further, I feel that there is more to this story. Consider the following:

My withdrawal stands, and I am going to be very vigilant in seeing what happens next.